The Chapter House Arts Society, as the choir was originally called, met for its first rehearsal on 16 October 1965.  Three friends who were associated with York Minster conceived the idea, wanting to help raise money for the Minster as it entered a phase of urgent restoration work.  They also wanted to make use of the Chapter House which, at that time, was closed to the general public. The original performers comprised Minster Songmen, Clergy, their wives, local teachers and friends.  Their first concert for the Minster appeal was on 18 December 1965 and was given in the Chapter House by candlelight, using borrowed candlesticks.  The programme consisted of carols, harpsichord pieces and carols played on an antique set of handbells, owned and expertly played by the choir’s founder Director, Andrew Carter.  A capacity audience set the pattern of success for the future.

The concerts continued in line with the original concept in subsequent years and in 1967 the choir name was changed to the Chapter House Singers and later to the Chapter House Choir.  With the exception of substituting organ for harpsichord, the format remains the same to the present day.  For many years the carol concerts were broadcast to a wider audience every Christmas Eve by BBC Radio.  Tickets are much sought after, and before the arrival of the internet used to involve getting up very early to join a long queue!

Since its formation in 1965, the Choir has become an integral part of York’s musical culture, especially through the annual Carols by Candlelight concerts. There is a wealth of history from the last 50+ years, and this history section will gradually be extended to include more information from past years. 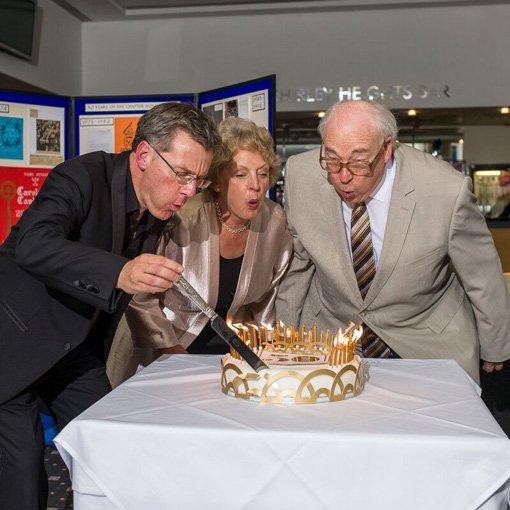 Read about our past Musical Directors

Past Programmes and Posters

This section is gradually being extended.