Formed in 1965 to raise funds for the York Minster Appeal, the Chapter House Choir continues to build on its reputation as one of the North of England’s finest amateur chamber choirs. We are a progressive and dynamic ensemble that regularly commissions new music and seeks to programme accessible and beautiful yet challenging programmes from the whole range of the choral repertoire. 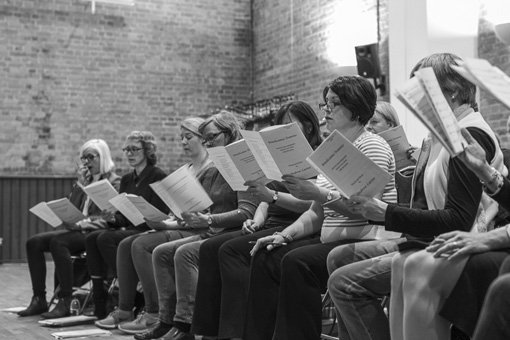 We have commissioned several other new works in recent years, most recently Roderick Williams’ Everyone sang for choir, youth choir and the King’s Singers, which was premièred in York Minster in November 2016.  Another new work, Comfort, was commissioned from award-winning emerging composer Lillie Harris in 2020, and received its first performance in November 2021.

To celebrate the Tour de France Grand Départ in Yorkshire we commissioned Alexander L’Estrange to compose a choral cantata. Song Cycle: Vive la vélorution was premièred in York Minster on 28 June 2014 by The Chapter House Choir along with 350 choral singers from across Yorkshire and the Call Me Al jazz quintet. Other commissions in 2014/2015 were In Memoriam by Gabriel Jackson as a tribute to our dear friend Clare Latham; Arcadia by Judith Bingham to commemorate the 100th Anniversary of the start of WWI and Come Spirit, a gospel-inspired piece by Paul Mottram. 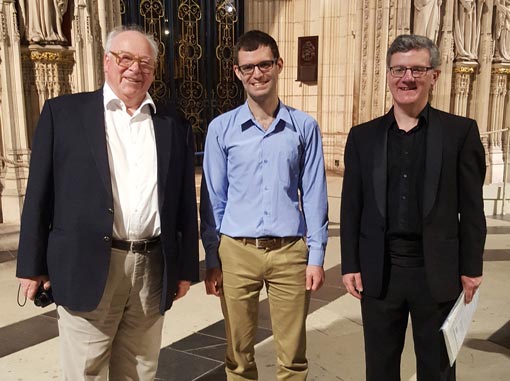 The choir’s founder, Andrew Carter, meets the incoming and outgoing Musical Directors (Ben Morris and Stephen Williams) after the summer concert in June 2017

The Chapter House Choir has always supported choirs and choral singing.  The season 2016-2017 began in style in September 2016 with a ‘Come and Sing Day’ led by eminent composer John Rutter. In September 2019 we followed this with another successful ‘Come and Sing Day’, with former member of the Kings Singers, Bob Chilcott.  In 2016 we established the Chapter House Youth Choir, who performed for the first time with the Kings Singers in York Minster in November 2016!  The young singers now perform regularly on their own, and also join the adult Chapter House Choir for two or three concerts each year.

The choir is extremely proud of its long-standing relationship with York Minster, and we are delighted that the Honourable Stephen Cottrell, Archbishop of York, has agreed to be our President.