Greetings from the Chapter House Choir

We are taking a well-earned break for the summer and resume rehearsals in September for our concert with the Chelys Consort of Viols on 5th November. Other dates for your diary for next season are on our Concerts and Events page. More details will be available in September.

We have had a busy summer term: on 25th June we gave a summer concert in St Mary the Virgin Church Boston Spa, together with the talented Chapter House Youth Choir. It was lovely to see so many of you there. On 4th June York Minster’s associate choirs (The Chapter House Choir and The Ebor Singers) combined for an evening of breath-taking choral music accompanied by the cathedral’s Grand Organ in celebration of Her Majesty The Queen’s Platinum Jubilee. It was fantastic to sing rousing coronation music to an almost full nave with standing ovations! We rounded off the summer with a beautifully atmostpheric service of Compline in the Quire of York Minster.

Our patrons benefit from reserved seating and special events. If you are interested in finding out more about the patrons scheme, please visit our Supporting the Choir page. We are very grateful to our patrons and members for their ongoing support.

We hope you all have a lovely summer and we look forward to seeing you at our next concert on 5th November.

We currently have vacancies for a tenor and a second bass. If you enjoy making music to a high standard we want to hear from you! Please get in touch and we shall arrange an audition as soon as we can.

There is also a limited number of choral bursaries (one per voice part) available to promising young choral singers aged 18 to 25 in full time education within any discipline.

Read about joining the Choir

About the Youth Choir

With the COVID-19 pandemic the Youth Choir moved online temporarily, producing two beautiful virtual Christmas carols in December 2020. The choir also had two super workshops developing performance skills, with guests Michelle Robinson and Laurence Williams.  In 2021 the young singers worked on a stunning virtual recording of Britten’s Hymn to the Virgin with the Gesualdo Six, which you can watch here. They also took part in Haydn’s Creation with the spectacular Gabrieli Consort & Players in York Minster on 6 November and performed in the sell-out Carols by Candlelight concert in York Minster in December.

So far this year the Youth Choir has given a spring concert in York, has held a Boys Sing workshop for male singers aged 11-16, funded by York Music Hub, has taken part in a performance of Bach’s St John Passion with English Touring Opera and has sung a summer concert in Boston Spa with the Chapter House Choir. 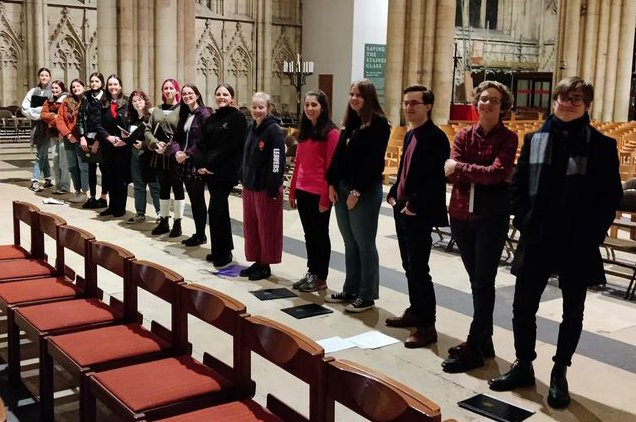 Congratulations to the young singers who auditioned successfully! If you know of anyone who might like to audition to join the choir, please encourage them to send an email to youthchoir@chapterhousechoir.org  – auditions will be available throughout the year, in person or by video call depending on current guidance and availability. Rehearsals resume in September after the summer holidays.